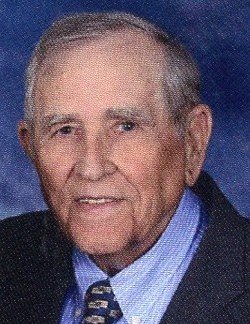 Samuel (Sam) Astor Crumbley, Jr. age 93 of Chatsworth, passed away Monday, Oct. 18, 2021 at Dalton Place.
He was preceded in death by his wife, Mary Dixon Crumbley; parents, Samuel A. and Carrie Crumbley, Sr.; sisters, Aline Jackson, Eunice Dunn, Clara Breon, and Carolyn Nelson.
Sam was a member of First Baptist Church in Chatsworth, Murray County Gideons, and the Whitfield-Murray Historical Society.
Sam served in the U.S. Army as a MP in The Philippines and Washington state.
Following his military service, he returned to Murray County where he met and wed Mary Dixon. Sam’s intention was to follow in his father’s footsteps as a farmer. Realizing that he didn’t have the funds to purchase his own land and equipment he moved to the Atlanta area intending to work there just long enough to gather the funds to pursue his intended career path. After a 37-year career with Lockheed in Marietta, Ga. he finally returned to his family farm where he and Mary spent most of their retirement. Sam never lost his love of farming and annually worked an extensive garden which provided most of his family’s vegetables.
Sam was deeply involved in church life and regardless of the church where he and his family attended, he served as a Bible Study teacher, Deacon, choir member and any other leadership role needed. He and Mary’s motto was “God first, family second and church third”. He carried on the example of his father praying for many individuals daily. This prayer warrior will be greatly missed.
He is survived by sons, Rick (Jean), Ron (Sheri), Sam III (Glenda), and Curtis (Jackie) Crumbley; nine grandchildren and five great grandchildren.
Funeral services to celebrate the life of Sam Crumbley was at 1 p.m. Friday, Oct. 22, 2021 from Chatsworth First Baptist Church with Rev. George Ross and Rev. Mark Carr officiating. Burial will be in Fairy Valley Cemetery.
The body laid in state at the church from 12:30 p.m. until the funeral hour.
Jones Funeral Home of Chatsworth is in charge of the funeral arrangements.